Five years ago today, we helped win the fight against PIPA & SOPA. While we’ve been part of the discussion for many policy issues regarding technology and the Internet, this victory is especially memorable. SOPA/PIPA was undeniably the catalyst for the creation of the i2Coalition. Let’s recount that process.

The i2Coalition started out as the Save Hosting Coalition, a grassroots organization focused on Internet infrastructure industry concerns around what two pieces of legislation – PIPA & SOPA – would do to the way the Internet works

We were particularly concerned how it would change who could be an Internet infrastructure company, a field historically made up of small, innovative businesses. Should SOPA and PIPA have passed it would have been considerably more difficult for a small or medium size business to exist in the Internet’s infrastructure.

In the months prior, we pulled together a small collection of web hosting companies who needed a voice. We spearheaded the letter-writing campaigns. Trips to Capitol Hill were organized for advocates of small business on the Internets. Representatives from these companies: real employees and business owners, met with members of Congress and Hill staffers to discuss the impact of these two pieces of legislation.

We put together an ad campaign that ran in The Hill and Politico. 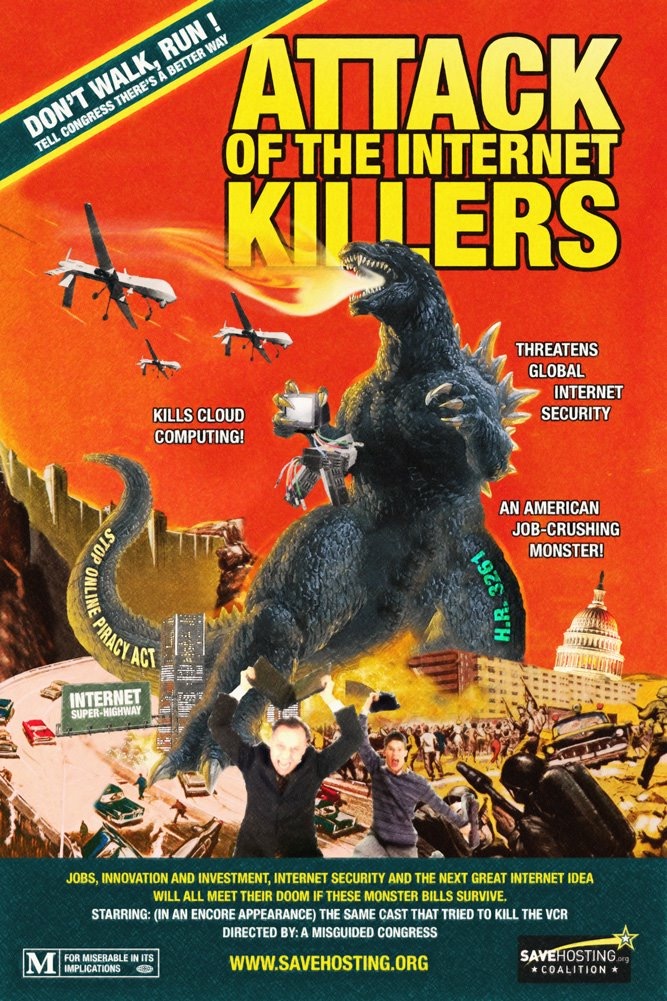 We made this video.

We also provided a CSPAN briefing.

We were invited by the Consumer Electronics Association (CEA) to join them in a series of strategic, high-level Congressional meetings. Our co-founder, Christian Dawson, was asked to represent the perspective of the web hosting industry in these meetings. Small business consultant Micah Schaffer (a.k.a. YouTube Employee #11), Leah Belsky of the Internet video enablement tool Kaltura, Hamish Chandra Internet advertising guru (and the guy behind the ‘Got Milk’ ads), and Alexis Ohanian co-founder of Reddit.com joined Dawson.

PIPA was likely to pass in the Senate if allowed to come for a vote. Senator Ron Wyden of Oregon was holding it up through procedural means, something he couldn’t keep up alone for an indefinite amount of time. Among others, we met with Senator Jerry Moran (R – KS) and senior staffers for Senator Maria Cantwell (D-WA). We explained our major concerns for what PIPA would do to the Internet economy. Sen. Moran was a former sponsor of PIPA, but he listened intently to our concerns. After our meetings, Senators Moran, Cantwell — as well as Senator Rand Paul (R – KY) — issued a letter to Senate Majority Leader Harry Reid joining Ron Wyden in his hold. This gave those fighting the precious time needed to raise awareness about SOPA and PIPA, building a campaign which culminated in what became known as Internet Blackout Day.

That Wednesday, when thousands of websites blacked out their servers to protest SOPA and PIPA, the Save Hosting Coalition, collaborated with another group focused on the startup community called Engine Advocacy. Together we put up a call tool: http://stopthewall.us/

Many of the blacked-out sites used our tool to generate calls to their Senators and House members.

Due to the massive response, the various types of contact generated from the tens of thousands of calls to Congressional offices was never fully tabulated. Whatever the numbers, our efforts generated the desired effect. Senator Harry Reid (D-NV) pulled his planned cloture vote on the bill, agreeing to go back to the drawing board. In his January 24 announcement postponing the event, Sen. Reid referenced our protest:

“In light of recent events, I have decided to postpone Tuesday’s vote on the PROTECT I.P. Act.”

In a statement, House Judiciary Committee Chairman Lamar Smith (R-TX) said his committee wouldn’t take up SOPA until “there is wider agreement on a solution.” “I have heard from the critics and I take seriously their concerns regarding proposed legislation to address the problem of online piracy.” “It is clear that we need to revisit the approach on how best to address the problem of foreign thieves that steal and sell American inventions and products.”

It is after this policy battle that the Save Hosting Coalition decided to become a permanent organization. In the past five years, there have been similar fights to this one. The i2Coalition was there to fight them, and we’re happy in promising our members and partners that we’ll be there to fight new ones. While this is not our founding anniversary, as our first victory over legislation that would cripple the continued competitive nature of the Internet, it is nearly as special. Thank you to our members for helping us along the way and we look forward to serving you in the future.

On January 18, 2023, the i2Coalition, joined by our members cPanel, LLC, Identity Digital Inc., Texas.net, Inc. and Tucows Inc., filed an amici brief with the U.S. Supreme Court in Gonzalez v. Google LLC, pointing out Section 230’s foundational role in allowing the Internet’s infrastructure to function efficiently and effectively without the threat of crippling […]

Sorry, but you do not have permission to view this content.

Save the Date: 2023 i2Coalition Congressional Fly-In

On June 8-9, 2023, i2Coalition will once again welcome industry colleagues to Washington, D.C. for an opportunity to engage legislators in conversation about the significant impact Internet policy issues have on members’ businesses.  The 2022 edition of the Fly-In was unique in that it provided an opportunity for members to celebrate i2Coalition’s accomplishments from its […]